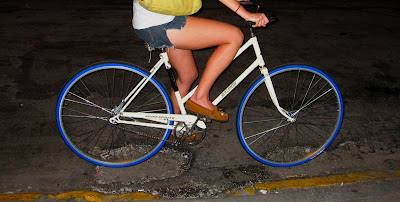 Who likes Raleighs? Well, I have two new ones.

I bought this white one in Tribeca last week from a woman who had it her entire life. She was very adamant about it staying "original" but guess what?, the steel wheels were like 300 lb squares, the tires were cracked, and the breaks were really 50 year old erasers.

So now it's clean and sleek with aluminum wheels (coaster brake) and blue wall tires. I like it. 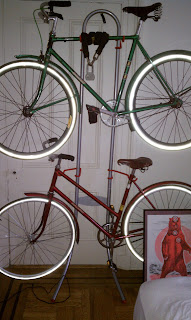 I bought his maroon one last night from a man who thought it was a men's bike. He rode a girl's Schwinn Varsity so I guess he didn't know the difference (He was from France [hand goes limp]). It was kind of expensive for not having a seat but it's all original and in perfect working order. Its a few years newer than the one above but there's not a thing wrong with it.
*Update - It matches my green Sprite with Brooks saddles and Michelin tires.